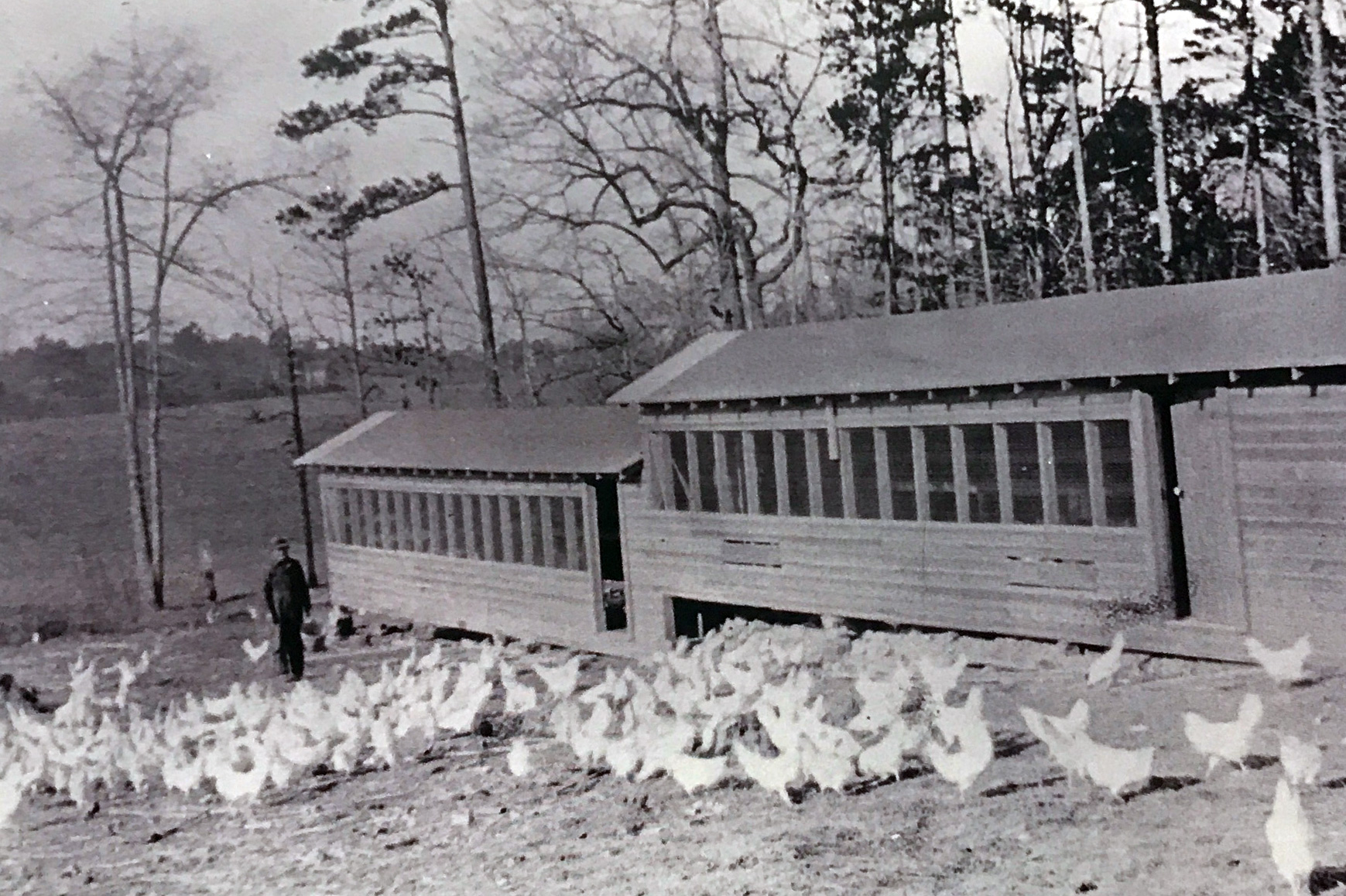 Simpson’s Eggs, Inc. was begun in 1925, by Z.K. Simpson, with just a few hens in his family’s back yard. Even though it was not called Simpson’s Eggs, Grandpa enjoyed traveling door to door in his Model T Touring Ford selling eggs to friends and neighbors. By the 1940’s, he was recognized in the “500 Hen Club” and made the trek into Charlotte, North Carolina to market the eggs. A business was born and a family came together to work. Sons Earl, Ray, and Leroy raised their own hens and sold the eggs to their dad prior to Z.K. and wife, Arrie, retiring in 1969.

Upon coming home from WWII and serving his country in the Army, Leroy decided to join his father and make raising hens and selling eggs his fulltime job. In 1961, Leroy and wife, Nell turned an old chicken house behind their residence in the New Salem community into an egg room to continue the business as L. R. Simpson’s Poultry Farm.

In the early 1980’s, growth and the need for space saw the move into a new facility, also on their own land, with modern technology unlike any other in the Southeast. Continued progress, expansion, and the need for space again merited a state of the art facility built close by in 1996. It wasn’t long before renovations had to be made to accommodate growth. New offices and hiring additional employees and a front entrance for business personal were among some of the exciting changes to the building, completed in 2010.

Three generations have joined Simpson’s Eggs since Grandpa started the business. In 1959, Leroy began the A&P warehouse deliveries in Charlotte and by 1962, was running trucks and deliveries to individual grocery stores. Leroy and Nell’s oldest son, Richard, graduated college with a degree in Business Administration, and returned to the only job he enjoyed all his young life, where he facilitated marketing that increased sales and production. Upon his graduation from NC State University Agri-Business College, Richard and Anita’s son, Alex came home to contribute and help manage a growing farm. Alex, now Vice President, oversees the farm operations, formulated feed, laying hens selection, waste management, and audits and inspections. Jake Simmons joined the family by marriage and readily became an asset to the business as Public Relations Manager as well as organizing store orders, on site customer relations and communications, and many of the bookkeeping tasks. Grandma Nell worked alongside Grandpa for decades on the production floor and doing all the bookkeeping. Now she concentrates most of her efforts on managing the finances, no small task for a farm the size of today’s Simpson’s Eggs.

Many changes have brought an interesting mesh of old and new over the decades. Deliveries have progressed from pickup trucks to tractor trailers with refrigerated trailers spanning multiple states, as well as exports out of the country. Approximately 1080 tons of feed delivered each week are specifically formulated to give the hens optimal nutrition for production. On any given day, 1,100,000 or more eggs are mainlined on conveyors from hen houses straight into the processing plant.

The year 2011 marked a new endeavor for Simpson’s Eggs on several levels. Construction of the new pullet farm for raising young birds for the laying operation was completed. Four houses have a capacity of 320,000 birds, 80,000 to each house. New trucks were purchased for use in the waste management plan necessary throughout the year. Waste is properly handled according to regulations. Waste application is used on nearly 3000 acres of Simpson’s Eggs farmland, supporting cattle, hay, pasture, row crops, and timber.

The success of any business relies on leadership, dedicated, skilled staff and Simpson’s Eggs has always been proud of its employees. Working seven days a week, office staff, farm managers, mechanics, compliance manager, plant processing manager, truck and driver managers, processing employees, hen and egg employees, and so many more get the work completed only to start again the next week. Leroy Simpson is a daily example of dedication and pride in one’s work that is instantly recognized by his family and over 45 employees. Ninety-two years young, he continues to be in the plant every day, helping customers and advising his staff.

In 2013, tragedy struck, and not only a business, but more importantly, a family was devastated when Richard, then Vice President, lost his life in an auto accident. Richard had been invaluable to the success and progress of the company he fell in love with as a boy. He made it his passion to live his dreams in the family business where he was the overseer of the entire operations, controlling inventory and marketing the product. Marketing is key and Richard believed that his involvement and work on the state and national levels in the poultry industry improved regulations that affect agriculture and farmers of America. He was a board member and past president of the American Egg Board, past president of the NC Egg Association, and board member of the United Egg Producers. Recognized for contributions on the local level, Richard served on multiple agriculture and business committees in Union County. After his passing, he was inducted into the Union County Agriculture Hall of Fame.

Simpson’s Eggs, Inc. prides itself on still being a family-operated business since its inception in 1925, upholding the values taught to them by their parents. There is never a time when this business does not look for opportunities to give back to a community and its people, a privilege they embrace. A day’s work on the egg farm that covers more than 215 acres with a poultry capacity today of 1,375,000 hens is a monumental task, a considerable growth from the 25,000 birds in 1969. God has blessed our families, four generations strong with children growing to take their places in the business, and we give Him the praise.

“For the Lord is good; His mercy is everlasting and His truth endures to all generations..” Psalms 100:3-5